A Game of Thrones: The Card Game 2nd Edition: Across the Seven Kingdoms

The comet’s tail spread across the dawn, a red slash that bled above the crags of Dragonstone like a wound in the pink and purple sky.
–George R.R. Martin, A Clash of Kings

In the aftermath of Robert and Eddard’s deaths in King’s Landing, the Great Houses of Westeros have pulled away from each other. Joffrey Baratheon has been crowned king, and now sits the Iron Throne, but Robb Stark has already been proclaimed King in the North, and Stannis plots in his fortress of Dragonstone, brooding on a throne that should have been his. It is the calm before the tempest: war in Westeros is imminent, and above it all, the Dragon’s Tail burns a blood-red trail across the sky. 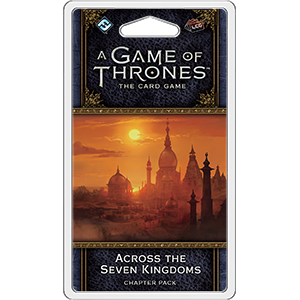 You're viewing: A Game of Thrones: The Card Game 2nd Edition: Across the Seven Kingdoms $11.99
Add to cart