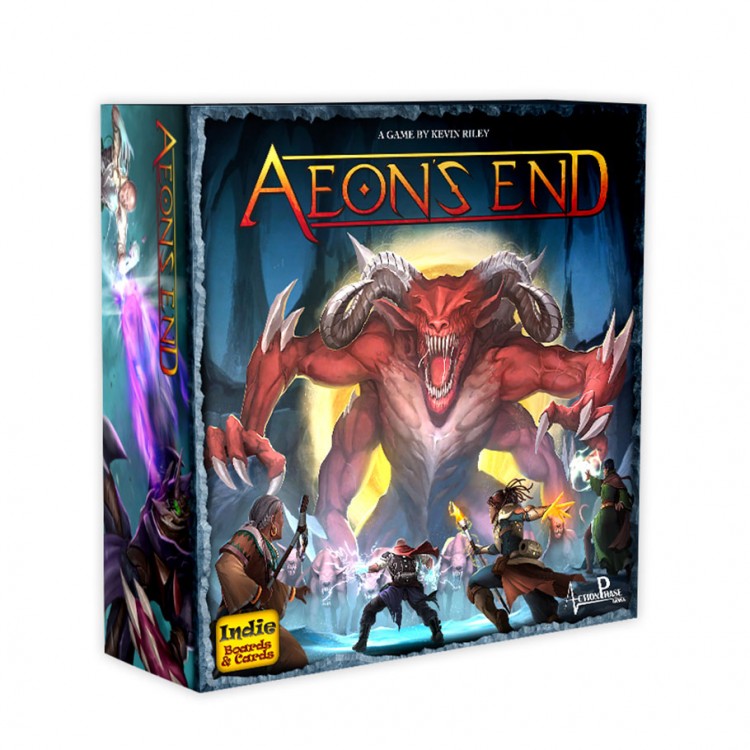 Board Game Night doesn’t have to end in someone flipping the table and rage quitting because someone was robbed in Catan for the 12th time in a row by the same person. There are a lot of cooperative games to choose from where everyone’s on the same team, or at least that’s the intent.

Here’s some cooperative games to consider:

Aeon’s End by Indie Boards and Cards is a 1 to 4 player cooperative deckbuilding game that has a number of innovative mechanisms, including a variable turn order system that simulates the chaos of an attack, and deck management rules that require careful planning with every discarded card.

Players will struggle to defend Gravehold from The Nameless and their hordes using unique abilities, powerful spells, and, most importantly of all, their collective wits.

Flash Point: Fire Rescue by Indie Boards and Cards is a fully cooperative game for 2 to 6 players where everyone plays on the same firefighting team – win or lose together! Every turn is filled with the tension of having to fight the fire back, rescuing victims or investigating points of interest. Players can ride the ambulance to safety or fire the engine’s deck gun in a desperate attempt to control the blaze. No two games are ever the same – and with two rulesets (family, & experienced) and 3 different difficulty levels there is a challenge to be had for all.

If you like Pandemic, you’ll like Flash Point. The game comes with a double-sided board to add variety to your game night.

Harry Potter Hogwarts Battle is a cooperative deck-building game for 2 to 4 players that is progressive, allowing rich game play experiences to unfold with varying levels of difficulty.

Starting with a personal deck of cards, you will use your skills and influence to build a more powerful deck with iconic Wizarding World characters, spells, and items. Only by working together will you be able to secure the castle and defeat He-Who-Must-Not-Be-Named!

Players create their own powerful combos on the fly, combining their heroes awesome abilities to take down nasty Marvel supervillains like Venom and Mystique. Over the course of the game, recruit increasingly powerful Hero cards to add to your deck, building a stronger and stronger deck of the ultimate Marvel Superhero combinations.

The Land of Andor is in danger. From the mountains and forests, enemies are advancing toward the castle of old King Brandur. Only your small band of heroes stands in their way. Will you succeed in defending the castle and protecting Andor?

Legends of Andor is a cooperative board game for 2 to 4 heroes. Live the legendary tales as you unite to battle ever-encroaching enemy forces.

Only if you work together will you have the strength to be the true heroes of Andor.

Mice and Mystics is a cooperative adventure game in which the players work together to save an imperiled kingdom.

Mice and Mystics is a boldly innovative game that thrusts players into an ever-changing, interactive environment, and features a rich storyline that the players help create as they play the game. The Cheese System allows players to horde the crumbs of precious cheese they find on their journey, and use it to bolster their mice with grandiose new abilities and overcome seemingly insurmountable odds.

Onirim is a solo/cooperative card game: you must work against the game, and find the oneiric doors before you run out of cards. Will you wander in each room, hoping to find the door that will take you further, or will you let chance sort things out and trust in your luck? In both cases, you will have to deal with the slithering nightmares that haunt the hallways of the labyrinth.

Prepare the city to repel an impending Invasion in this new expansion for Orleans! Inside the box you’ll find several different scenarios to change the game of Orleans – including cooperative play, solo play, head-to-head play, and secret objectives!

Orleans Invasion is an expansion that requires the Orleans base game.

As skilled members of a disease-fighting team, you must keep four deadly diseases at bay while discovering their cures.

You and your teammates will travel across the globe, treating infections while finding resources for cures. You must work as a team to succeed. Pandemic is a cooperative game, all players win or lose together.

The clock is ticking as outbreaks and epidemics fuel the spreading plagues. Can you find all four cures in time? The fate of humanity is in your hands!

Pathfinder Adventure Card Game Rise of the Runelords Base Set

Play through adventures, battle monsters and villains, and acquire new feats, items, allies, and more, customizing your deck and increasing your character’s power-all without a Game Master!

Sentinels of the Multiverse

Sentinels of the Multiverse is the award-winning game in which players join forces as heroes to combat a dastardly villain in a dynamic environment! The game is a cooperative fixed-deck card game where players play as one of ten heroes battling against a villain where the environment has effects on the game.

Sentinel Tactics puts you in control of one of the many super-powered characters from Sentinel Comics.

Combat takes place on a hex-grid map, and attack and defense is based on the rolling of six-sided dice. Whereas the Sentinels of the Multiverse card game is a fully cooperative game, Sentinel Tactics is a team based game, pitting groups of heroes and villains against each other. Groups of players will cooperate against either a villain player or players, or against another team of players! Sentinel Tactics is a competitive game, but cooperation and teamwork are still vital to the gameplay!

One of the best cooperative games of all time, award winning Robinson Crusoe comes back in this new edition from Portal Games. Based on the Game of the Year edition released previously in Poland, Germany, Spain and France, it brings this amazing game to a whole new level.

The Grizzled is a cooperative game about survival in the trenches during the World War I where players win or lose together. A true challenge, intense and immersive, it’s also a tribute to our ancestors who have fallen in battle before us.

Featuring beautiful art by French artist Tignous, who was tragically killed in the Charlie Hebdo attack, the Grizzled’s outstanding art is the perfect complement to its message of peace and enduring friendship.

Welcome to the dark times! In a mad quest for forbidden knowledge and ultimate power, the necromancers have unleashed the apocalypse upon the living. Zombies have destroyed the King’s armies, and now roam the land, spreading chaos and death.

Draw your sword, span your crossbow, and ready your spells!  For the few, the brave, it’s time for… Zombicide: Black Plague!