A Game of Thrones: The Card Game: A Deadly Game Chapter Pack

“When the snows fall and the white winds blow, the lone wolf dies, but the pack survives.”
–George R.R. Martin, A Game of Thrones

Play the game of thrones for higher stakes than ever before with A Deadly Game, the second Chapter Pack in the Wardens cycle for A Game of Thrones: The Card Game! In this expansion, you’ll find new support for some of the Wardens cycle’s key themes: trait-based decks, limited responses, and cards that reward you for using some of the game’s most powerful and recognizable characters.

This Chapter Pack offers sixty new cards (three copies each of twenty different cards), including new versions of cards such as Brienne of Tarth, Khal Drogo, and The Eyrie. Whether you choose to bide your time with Castle plots, create decks based on traits such as Dothraki or House Tully, or observe and strike from afar with House Arryn, you’ll find the cards you need in A Deadly Game.

An A Game of Thrones: The Card Game core set is required to play. Contains cards 21-40 of the Wardens cycle. 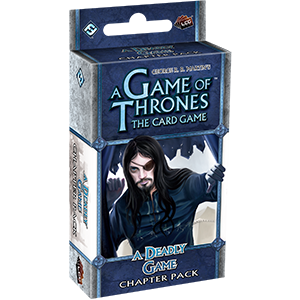 You're viewing: A Game of Thrones: The Card Game: A Deadly Game Chapter Pack $11.99
Add to cart