Lord of the Rings LCG: The Thing in the Depths

Having finally caught the Stormcaller after a harrowing pursuit across troubled seas, several of Middle-earth's heroes prepare to board the Corsair ship in The Thing in the Depths, the second Adventure Pack in the Dream-chaser cycle for The Lord of the Rings: The Card Game. Their efforts to reclaim the Númenorean artifact the Corsairs had stolen erupt into fierce battles that quickly spiral into nightmare when the waters beneath the Stormcaller begin to churn and massive, tentacled arms erupt from the sea to grapple the ship and the sailors aboard it!

The sixty new cards in The Thing in the Depths allow you to determine the course of the resulting battle, even as they introduce a new Spirit hero and three copies each of eight different player cards, including innovative new allies for each of the four spheres. Will these new allies add enough strength to your fellowship to help you survive your high-seas confrontation with an incomprehensible monster? Will they prevent you from seeing the Stormcaller ripped to pieces beneath you or keep you from being flung into the turbulent waters? You'll need every ounce of your strength to survive… You'll even need the aid of the Corsairs you were fighting! 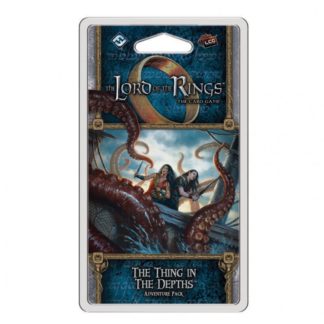 You're viewing: Lord of the Rings LCG: The Thing in the Depths $11.99
Add to cart