Not every victory is achieved at the end of a blaster barrel or by the signing of a treaty. Spies do the majority of the work, finding out where the soldiers need to deploy and what would make the enemy wish to surrender. By engaging in the most unconventional of warfare, spies save lives—and take them—in secret. Often uncelebrated, their vital work is necessary if there is to be any hope of toppling the Empire.

Cyphers and Masks is a sourcebook for the Star Wars™: Age of Rebellion Roleplaying Game that greatly expands the options and opportunities for the Spy career. At 96 full-color pages, Cyphers and Masks includes new specializations and species perfect for starting a new campaign or integrating into existing ones. New vehicles, equipment, and droids designed to be assets and adversaries to characters engaging in clandestine operations are included with new rules for utilizing the skills most often associated with Spies and their tradecraft. Gamemasters are also given additional tools and guidance for building stories for Spy characters with an emphasis on Intelligence and Counterintelligence operations. 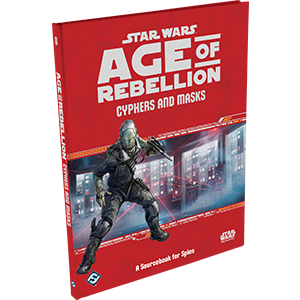