Prince Oberyn's spear flashed like lightning and found the gap in the heavy plate, the joint under the arm. The point punched through mail and boiled leather. Gregor gave a choked grunt as the Domishman twisted his spear and yanked it free. “Elia. Say it! Elia of Dorne!”
–George R.R. Martin, A Storm of Swords

Many lives were lost in Robert Baratheon’s bloody rebellion. Some, such as Rhaegar Targaryen, died in honorable combat on the field of battle. Others, like Elia Martell, were brutally slain at the hands of the conquering Lannister forces. For fifteen years, House Martell has held its thirst for vengeance in check, waiting with the utmost patience. And although the Red Viper’s duel with Ser Gregor Clegane ends in tragedy for House Martell, it is also the catalyst that sets Doran Martell’s plots in motion…

Oberyn’s Revenge, the fifth Chapter Pack in the Blood and Gold cycle in A Game of Thrones: The Card Game, continues the major themes of the cycle and invites you to play out some of the most iconic events from A Storm of Swords. Even as dark events and schemes unfold around you, you can use your gold and the new bestow keyword to gain new levels of control over the game. As new versions of the Red Viper and Bran Stark enter the game alongside characters like Irri and Ser Garlan Tyrell, your vengeance is about to become more vicious than ever before. 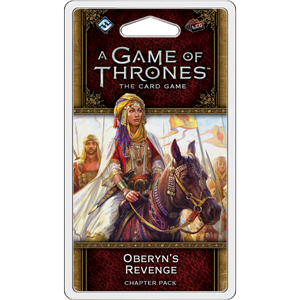 You're viewing: A Game of Thrones: The Card Game 2nd Edition: Oberyn’s Revenge $11.99
Add to cart