King Robert Baratheon is dead! Each of the Great Houses believe they have a claim to the crown! The battle for the Iron Throne has begun! In the A Song of Ice & Fire: Tabletop Miniatures Game, each player controls one of the Great Houses of Westeros, commanding battlefield units, legendary Heroes, and manipulating the political stage, all in an attempt to claim the greatest prize of all: The Iron Throne! With accessible and streamlined gameplay designed by Eric M. Lang and Michael Shinall, players in the A Song of Ice & Fire: Tabletop Miniatures Game can recreate their favorite moments from the series or create their own stories. What if the Red Wedding never happened and Robb Stark assaulted King`s Landing? Battles can range in size from full-scale conflicts like the Battle of the Blackwater to smaller skirmishes, like Jon escaping from the wildings in A Storm of Swords. Decide the fate of Westeros with A Song of Ice & Fire: Tabletop Miniatures Game Starter Set – Stark vs Lannister, featuring everything two players need to fight epic battles in the Seven Kingdoms. 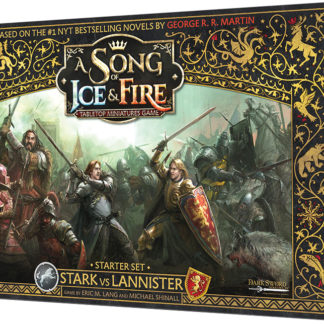