…The lag. It was 1.2 seconds. That could mean only one thing. He was accessing a node outside of the earth's atmosphere. He started a mapping protocol.

Upstalk is the first Data Pack in the Lunar Cycle for Android: Netrunner The Card Game. Its sixty cards (three copies each of twenty different cards) transport players to a life one-point-two seconds out of the ordinary.

When cyber explorer Nasir Meidan's obsessive search for the net's legendary source protocols leads him beyond the reaches of Earth's atmosphere, he discovers powerful fragments of pure coding, startling new ice, and a wealth of data that neither he nor anyone else could have ever expected. What can happen in one-point-two seconds? Expectations are thwarted. Runners and Corps assume different roles. The game's tempo swings back and forth. Corporate trace attempts can punish Runners even as they fail. Corporations come first. 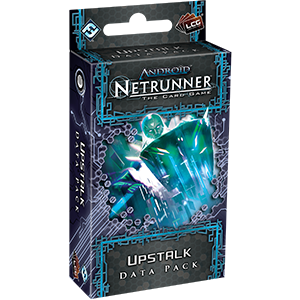