The two rival spymasters know the secret identities of 25 agents. Their teammates know the agents only by their CODENAMES.

The teams compete to see who can make contact with all of their agents first. Spymasters give one-word clues that can point to multiple words on the board. Their teammates try to guess words of the right color while avoiding those that belong to the opposing team. And everyone wants to avoid the assassin.

Codenames: win or lose, it’s fun to figure out the clues.

This is a fun party game where your team tries to solve as many clues as possible per turn to try to get ahead of the opposing team. You basically try to relate one word to as many of your own cards as possible without having them relate to your opponent's cards. If your team finds all of your team's cards before the opposing team does, then you win. This game is easy to learn and everyone gets involved. I like this game for a group of people who may or may not be into board games.
– Elliott 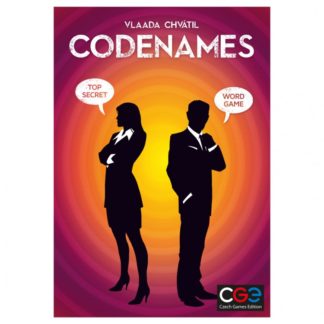