Choose your clan, maneuver your forces, and fight for the powerful crystals of the Crystal Clans, the new 2-player expandable game from Plaid Hat Games!

In Crystal Clans, 2 players go to battle with unique armies. Leading their squads across the battlefield, players compete to gain powerful crystals which hold the power to dominate their world.

Choose to command 1 of 6 clans, including the adaptable Water Clan, the peaceful Flower Clan, the relentless Skull Clan, the innumerable Blood Clan, the wise Meteor Clan or the unyielding Stone Clan.

– Actions taken with a back-and-forth initiative system. The more you do on your turn, the more you opponent gets to do on hers.
– Stack your units together into squads, carefully choosing their order and moving the squad together.
– Each card in your deck can be used either as a unit on the battlefield or as a battle card, adding surprise to each encounter.
– Earn the power of magic crystals that pave the path to victory with their magical powers that have their own impact on the battle.

The first clan to claim 4 crystals wins the game and fulfills their destiny to dominate the world of the Crystal Clans.

With art by Martin Abel, Crystal Clans is one of the most beautifully illustrated games of 2017. Stunning cards, all with thematic abilities, spread across a hand-drawn board, promise a captivating experience every time you sit down to play.

Join the Crystal Clans and fight for the crystal zones this fall! 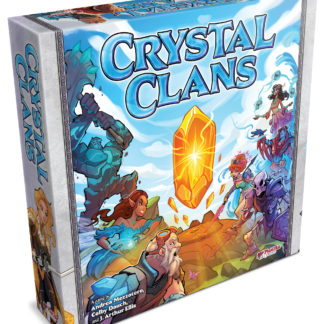