Fate of the Elder Gods

In Fate of the Elder Gods, players take on the ever-maddening role of cults trying to summon ancient evil and herald the fall of mankind! Each cult is in competition to be first to summon their god, but they all must also repel intrepid investigators working to seal off the gate to beyond with Elder signs. Gather arcane artifacts, cast powerful spells, embrace the Dark Gift of your Elder God, and be first to hasten doom…before it's too late!

During the game, players use a variable hand of spell cards to do one of two things to aid their cult in their mission: Use the spell's Astral Symbol to navigate the areas around Arkham on the unique Fate Clock board, or use the symbols in a location's Astral Column to ready a spell. Readied spells can be cast at any time, but while in a cult's Spell Reserve their primary Astral Symbol can aid in readying future spells, creating an engine for pumping out more potential power.

As cults travel to the six locations on the Fate Clock, they activate specific powerful abilities, such as gaining useful artifacts at The Museum or enabling their Elder God's Dark Gift at The Ceremony. As cults send more and more cultists to a location, they may gain control there, adding even more powerful abilities. However, cults must be careful how they navigate Arkham as a location with lots of activity will attract pesky investigators. Tempt fate too many times and the investigators may raid your cult's lodge, placing Elder Signs, and generally getting in the way of summoning your Elder God. Gain too many Elder Signs and it's game over!

If any cult can manage to raise their Summon Track to 9 before the investigators save humanity, their Elder God awakens and they win! Of course, “win” is a relative term as it will certainly herald the end of the world — but that's a small price to pay for eternal servitude to the Ancient Ones. 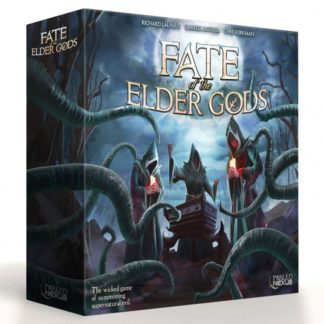