Ages ago, Zeus won control of Mount Olympus in an epic dice battle against Hades. Now, after ages of toiling in the underworld, Hades has finally convinced the other gods and goddesses that the time has come to challenge Zeus for control of the throne. As one of these powerful deities, you possess great power and the drive to make Olympus your own, but will luck also be on your side?

In Fleecing Olympus, players take turns using their deity’s powers, rolling dice, and using powerful card abilities in an effort to steal golden gems from other players. When the game ends, the player holding the most gems will become the new ruler of Mount Olympus and win the game! 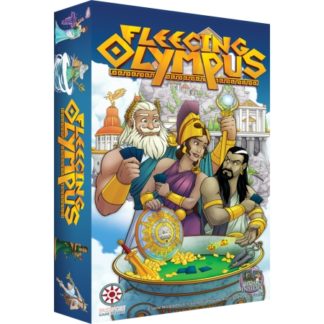