Fleet Wharfside is game #8 of the E-G-G Series!

Wharfside is a standalone card game based on Fleet and Fleet: Arctic Bounty. Players compete to complete contracts by selecting contracts from the Market and by collecting fish from their Fleet at the Wharfside. It's what happens when the Fleet comes home!

Tales of the bountiful harvest at Ridback Bay have traveled far, attracting merchants to the local Wharfside who wish to pay handsomely for your haul. A successful fisherman’s day is not done with the catch; keen business decisions will determine if your Fleet has amassed a rich profit! Merchants have offered generous contracts for the catch, but which offer the greatest benefits? Choose and complete the most lucrative contracts and reap your reward!

In Wharfside, players fulfill Contracts from local Ridback Bay businesses. Each turn, players will either collect fish from their Fleet at the Wharfs (by taking cards) or choose to purchase a Contract from the Market. Contracts provide a bonus while in play, but once they are completed the bonus goes away too! The player who collects the most VP from Contracts, Trophies, King Crab,final Goods, and their Captain Bonus wins the game! 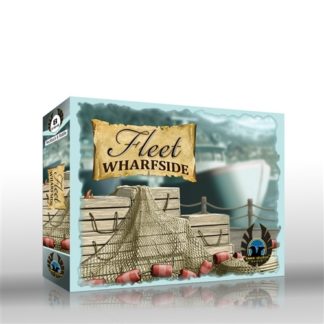