Forge War returns with a second printing. The rule book has been carefully edited to present a clearer explanation of the game. Minor typos have also been fixed in the rules, player boards and back of the box. The art and design have remained the same but have been graphically enhanced in many cases to present the game with more clarity on the cards and game board.

Forge War is a competitive game of economic management and spatial reasoning in a high fantasy theme. Players must undertake quests set forth by the king to slay fierce foes like goblins, assassins and a mighty red dragon. But weapons and adventurers don’t come easily! Players must successfully navigate the kingdom’s mine to gather metals and precious gems, then head to the market to get their hands on weapon designs so they can forge their own implements of victory!

Forge War is a complex game full of player interaction and meaningful decisions. The core game can be played in about an hour, though players also have the option of playing a longer 3-stage game for a full epic experience. 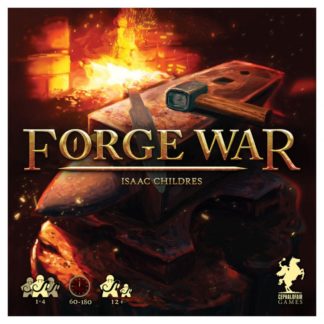