Lord of the Rings LCG: Assault on Osgiliath

“Didst thou think that the eyes of the White Tower were blind? Nay, I have seen more than thou knowest.”
–Denethor II, The Return of the King

Fantasy Flight Games is proud to announce the upcoming release of Assault on Osgiliath , the fourth Adventure Pack in the Against the Shadow cycle for The Lord of the Rings: The Card Game !

After Middle-earth’s heroes wage a terrific battle against Orcs and fires to save the townsfolk of Amon Dîn , they return to Minas Tirith just in time to join the army of Gondor as it marches to Osgiliath. Led by Lord Boromir, the war host means to strike a blow against Mordor, and the assistance from some of Middle-earth’s greatest heroes may prove crucial to the mission’s success!

Assault on Osgiliath immerses players in the fantastic locations, ferocious combats, and riveting story of one of the most sweeping and epic battles in The Lord of the Rings: The Card Game . As the war host engages the Orcs and Southrons who have garrisoned themselves within Osgiliath’s ruins, players vie with the encounter deck for control of Osgiliath locations, traveling from one to the next. Battles and sieges, Orcs and Southrons, bloody advances and strategic retreats, unique locations, new enemies, and deadly treachery – Assault on Osgiliath has it all! 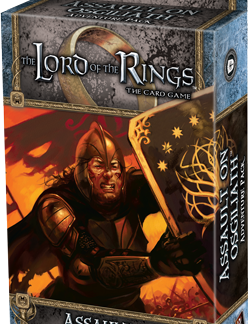 You're viewing: Lord of the Rings LCG: Assault on Osgiliath $11.99
Add to cart