Lord of the Rings LCG: The Steward’s Fear

“Hail, Lord and Steward of Minas Tirith, Denethor son of Ecthelion! I am come with counsel and tidings in this dark hour.” –Gandalf, The Return of the King

The Steward’s Fear is a tale of corruption within the heart of Gondor that follows immediately upon the events of the three scenarios from the Heirs of Númenor expansion. When Middle-earth's heroes investigate a plot against the realm of Gondor, their search for clues leads them out of the main streets and back alleys of Minas Tirith…deep into an underworld where nefarious plots and deadly villains await them.

The Steward's Fear follows startling turns into adventure in an all-new quest like none before it. Kicking off the Against the Shadow narrative arc, The Steward's Fear introduces 60 new cards, including an all-new scenario, a new hero, and three copies of each new player card. 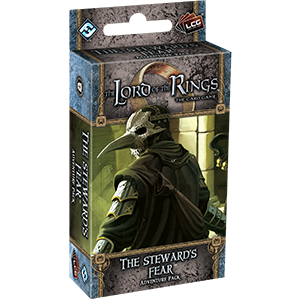