Lord of the Rings LCG: Wastes of Eriador

“What roads would any dare to tread, what safety would there be in quiet lands, or in the homes of simple men at night, if the Dúnedain were asleep, or were all gone into the grave?” –Aragorn, The Fellowship of the Ring

The Wastes of Eriador is the first Adventure Pack in the Angmar Awakened cycle for The Lord of the Rings: The Card Game.

In The Wastes of Eriador, several of Middle-earth’s heroes must join forces with the noble Dúnedain who have long guarded the North’s simpler folk from the untold evils that have for centuries resided within Carn Dûm and its environs. Following immediately upon the heels of the epic events that unfold in The Lost Realm deluxe expansion, the scenario from The Wastes of Eriador tasks you to rescue a captive Ranger. However, as you pursue the enemies who have captured him, your trail leads you ever northward, ever deeper into the hills of Angmar. There, as day fades into night, the howling of wolves suggest that your party of hunters may soon become the hunted…

In addition to its new scenario, The Wastes of Eriador also contains a new hero and three copies each of nine different player cards. In the lands traveled so often by the Rangers of the North, you’ll find new Dúnedain, Hobbits, Scouts, and side quests. You’ll also find new ways to protect your heroes from damage, as well as the new Valour trigger, which continues to gain strength throughout the Angmar Awakened cycle. 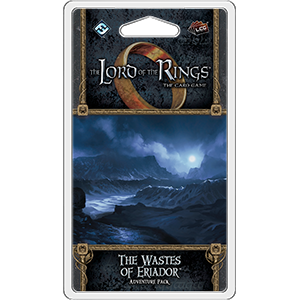 You're viewing: Lord of the Rings LCG: Wastes of Eriador $11.99
Add to cart