Lord of the Rings LCG: Across the Ettenmoors

“This new country seemed threatening and unfriendly. As they went forward the hills about them steadily rose. Here and there upon heights and ridges they caught glimpses of ancient walls of stone, and the ruins of towers: they had an ominious look.”
–J.R.R. Tolkien, The Fellowship of the Ring

The scenario introduced in Across the Ettenmoors thrusts you squarely into the heart of the troll-fells, a stretch of land rumored to be riddled with Trolls. As your heroes travel deeper into this dangerous territory with the hordes of Mount Gram at their back, they know there's no path for them but forward. The hills rise, the rocky ground lies quiet under dark clouds and flashes of lightning, and your heroes press on. In this scenario, the oppressive silence is broken only intermittently by the heavy footfalls of towering, lumbering Trolls. To complete your journey through the Ettenmoors, you don't need to slay some fell rider or uncover the Dark Lord's hidden servants; you need only survive…

Fortunately, the sixty new cards in Across the Ettenmoors include more than its scenario; they also introduce a new Tactics hero, who lends versatility to your fellowship's defensive efforts, as well as three copies each of nine different player cards. These touch on several different themes simultaneously, and you'll find new Signals, Mounts, and Ents taking their place alongside new Valour effects and a Tactics side quest. 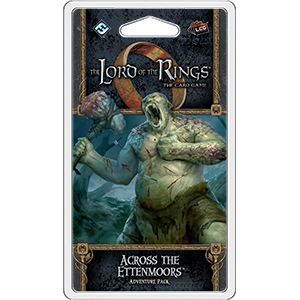 You're viewing: Lord of the Rings LCG: Across the Ettenmoors $11.99
Add to cart