Everything has led to this night. Years of fighting and political intrigue have culminated in a single mission that will bring the empire to its knees. Your cell has been hand selected to complete this mission but you live in fear that your ranks have been infiltrated.

With only minutes to act, you must use the information gained during the night to identity and assassinate a spy. But be careful, you can never be certain how many spies your group contains, nor can you trust that your own motivations won't be swayed by nefarious means.

One Night Revolution is a super-fast game of secret identities for 3 to 10 players that combines all the deductive and chaotically fun elements of the One Night Ultimate Werewolf series with more structured game play. The result is a very addictive game that is easy to learn and will be played over and over again.

Every player starts with a specialist role and an ID (either Government Informant or Rebel Fighter). At night, the Informants reveal themselves to one another – assuming any exist, that is, as at all player counts between zero and three Informants are in play – then all players complete their specialist action in a clockwise. Specialist actions include gathering information, switching roles, and helping players in their attempt to identify the Informant(s) before the day is over. If a majority of players identify an Informant, the Rebels wins but if the Informant(s) remain hidden, they win! 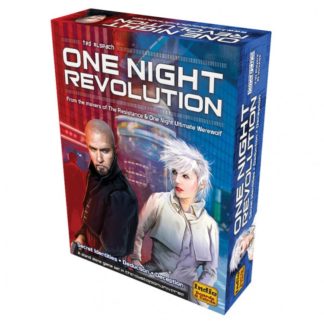