Railways of the World: Event Deck

In Railways of the World, players build a track between cities and develop faster locomotives to deliver a limited supply of goods to those cities in an effort to become the most successful “Rail Baron”.

Adding the Event Deck to any of the games in the series is easy. Just create space for these card stacks near the game board—Event Deck, Future Event, Current Event and a Discard Pile.

The Event Deck provides many interesting options and more cards than players can use during a single game,

so the deck never feels repetitive. Players can build their own custom decks: from a vicious deck filled with negative events to a more prosperous deck filled with positive events. The deck can also be tweaked for each of the expansion maps and there are even 4 blank cards for those who wish to create cards of their own.

Intrigued? Don’t wait; get started with this new twist on your old favorite today! 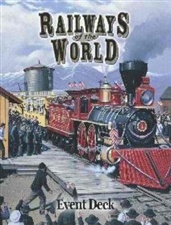 You're viewing: Railways of the World: Event Deck $7.99
Read more