Bend the creatures of the Ru steppes to your will with the Beastmaster Th’Uk Tar Hero Expansion for Runewars Miniatures Game! When the Uthuk march into battle, their ranks are filled with not only tribesmen of the Ru Steppes, but also deadly beasts that thrive in the broken lands. Only Beastmaster Th’Uk Tar can bend them to his will, using his spine whips to beat the creatures into submission. Marked by the Ynfernael with hooked feet and razor fangs, this Uthuk tribesman was destined for glory from infancy. Now a chieftain, he uses his unholy link to lead his pack to war, and all shall either submit or perish!

This is not a standalone product. It requires a copy of the Runewars Miniatures Game Core Set and the Uthuk Y’llan Army Expansion to play. 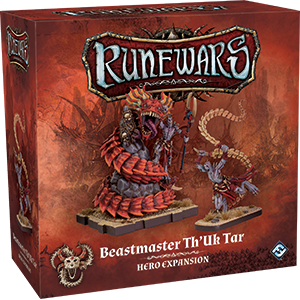