You've been hired by the town of Scoville to meet their need for heat. To do so you'll have to plant, cross-breed, and harvest the hottest peppers.

While the gameplay is simple, the strategy is complex. Players will race to be the first to plant and harvest the best peppers, so that they can be the first to fulfill the most valuable recipes.

Each game of Scoville is played over a series of rounds. Each round has the following phases: auction for player order and new peppers, plant peppers in the fields, and harvest peppers via cross breeding all with one goal in mind: fulfill the town's spicy craving for peppers!

In the Planting phase, in turn order each player will plant one pepper in the fields next to the existing peppers. The Town Mayor may award bonus points if they planted exotic peppers.

In the Harvest phase which is in REVERSE turn order, players will move their pepper farmer meeple up to three spots in the fields. For each location where they are between two planted peppers, those peppers will cross-breed. That player will harvest the cross-bred peppers and add them to their supply.

In the Fulfillment phase and in turn order, players have the opportunity to fulfill one Market Offer and complete one Chili Recipe. These are completed by turning in the required peppers. Players may also sell one type of pepper per round as an extra source of income. 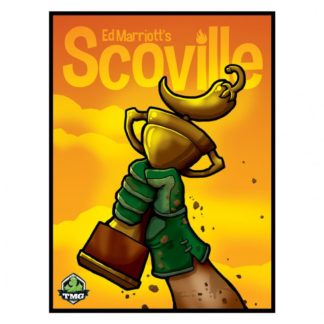