The game offers all the thrills of traditional trading card game style combat, combined with the fun of a deckbuilding game. Play powerful ships, destroy enemy bases or blast your opponent directly on your way to victory!
* Portable – The whole game fits in a deckbox.
* Expandable – One deckbox supports 2 players. Use additional copies for multi-player games.

This is easily my favorite Deckbuilding game. I even like all of the expansions. The only thing I don't like about it is the scorekeeping, but the publisher, White Wizard Games, have now come out with an excellent scorekeeping app for your phone. I usually carry Star Realms around if I know we're going to be waiting around for something.
– Elliott 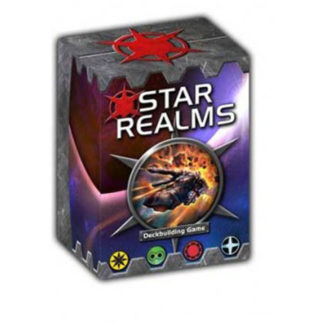