This slipcase set includes the Vampire the Masquerade Corebook, Camarilla and Anarch supplements. Vampire: The Masquerade Corebook. Vampire: The Masquerade is the original and ultimate roleplaying game of personal and political horror. You are a vampire, struggling for survival, supremacy, and your own fading humanityafraid of what you are capable of, and fearful of the inhuman conspiracies that surround you. As a vampire you suffer the pangs of the Hunger, the relentless and terrible thirst for human blood. If you refuse to deal with it, it will overcome your mind and drive you to terrible acts to slake it. You walk this razor`s edge every night. Dark designs, bitter enemies, and strange allies await you in this World of Darkness. The classic that changed roleplaying games forever returns! This fifth edition features a streamlined and modern rules design, beautiful new full-color art, and a rich story experience for players. Powered by the innovative Hunger cycle, the game also includes rules for creating system supported character coteries, Loresheets to directly involve players with their favorite parts of the setting and The Memoriam, a new way to bring the character`s detailed backgrounds and expand on them in-session. V5 is a return to Vampire`s original vision, moving boldly into the 21sth century. While the rules have been redesigned, this new edition honors the deep story of the original, advancing the metaplot from where it left off and detailing exactly what has happened in the world of the Kindred up until tonight. The terror of the Second Inquisition, the conspiracies behind the Gehenna War, and the rekindling of the War of Ages: these are the building blocks of the modern V5 chronicle. V5 has been developed, designed, and written by Kenneth Hite, Mark Rein-Hagen, Matthew Dawkins, Juhana Pettersson, Martin Ericsson, Karim Muammar, Mary Lee, Karl Bergstrm, Freja Gyldenstrm, Jennifer Smith, Tia Carolina, Jason Andrew, Tomas Arfert and Jason Carl. Vampire: The Masquerade – Anarch Supplement. Welcome to a blood thriller on the streets of the modern nights. For centuries the Anarch Movement enjoyed an uneasy truce with the Camarilla, but no longer. Now, the Unbound refuse to bow to the sickening hypocrisy and tyranny of their former allies. Claiming the nighttime streets as their own, the Anarchs seek independence from the despotic Elders, by any means necessary. Only the toughest and smartest of self-made vampires will survive. Featuring all-new essays on nocturnal survival and politics from Juhana Pettersson. Vampire: The Masquerade – Camarilla Supplement. The global blood opera of the Camarilla story continues. As the eldest vampires begin to vanish, the Ivory Tower starts to crack under the weight of its own decay. Once it was the mightiest faction of vampires in the world, a stronghold of immortality. Now it retreats into a maze of neo-feudal conspiracies to protect itself against the deadly threat of the Second Inquisition, struggling to enforce the Masquerade in the face of modern technology. Featuring insights and perspectives on unlife in the Camarilla from Mark Rein-Hagen and Matthew Dawkins. 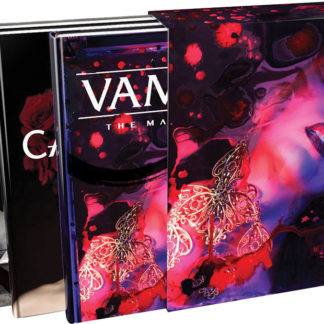