A Game of Thrones: The Card Game 2nd Edition: Calm Over Westeros

“The Great Shepherd sent me to earth to heal his lambs, wherever I might find them.”
–George R.R. Martin, A Game of Thrones

Westeros lies under a deceptive calm. In King’s Landing, Eddard Stark pulls another layer away from the lies surrounding Robert Baratheon’s children. The Eyrie is shaken by the arrival of Tyrion Lannister and his desperate gambit to win his freedom. Across the Narrow Sea, a maegi plots her vengeance against Khal Drogo for the destruction of her peaceful village. Everywhere, events are set in motion that will bear terrible consequences.

In the Calm over Westeros Chapter Pack, the first cycle for A Game of Thrones: The Card Game approaches the end of the first book in A Song of Ice and Fire. Like the other Chapter Packs of the Westeros cycle, this expansion offers new cards and plots to increase your deckbuilding options. You’ll also find instantly recognizable characters and locations entering the game for the first time, including Bronn, Mirri Maz Duur, and The Eyrie. With the further addition of two new plots—one loyal to House Tyrell and one neutral—this Chapter Pack will fuel your future decks and strategies. 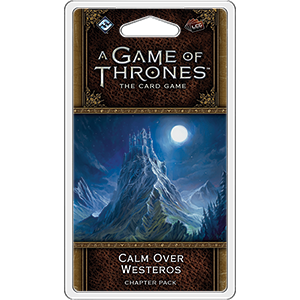 You're viewing: A Game of Thrones: The Card Game 2nd Edition: Calm Over Westeros $11.99
Add to cart