A Game of Thrones: The Card Game 2nd Edition: The Archmaester’s Key

There were stone cups along the rim of the pool. Arya filled one and brought it to him, so he could drink. The young man stared at her for a long moment when she offered it to him. “Valar morghulis,” he said. “Valar dohaeris,” she replied.
–George R.R. Martin, A Feast for Crows

The great battles of the War of the Five Kings have ceased with the deaths of Robb Stark, Balon Greyjoy, Renly Baratheon, and Joffrey Baratheon. In King’s Landing, Tommen is hailed as the new king, while Stannis Baratheon and his supporters join the Night’s Watch at the Wall, protecting the realm against the threat from the north. Yet the game of thrones is far from over. Doran Martell sets his plans for vengeance in motion, the ironborn call for a kingsmoot, and Daenerys Targaryen solidifies her control over the city of Meereen. More blood will be spilled, and crows will cover the battlefield before Westeros knows peace. 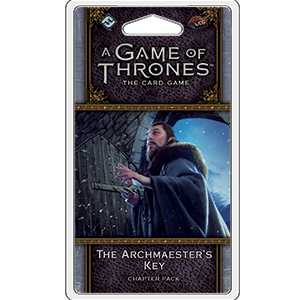 You're viewing: A Game of Thrones: The Card Game 2nd Edition: The Archmaester’s Key $11.99
Add to cart