A Game of Thrones: The Card Game 2nd Edition: Journey to Oldtown

He tried to take his mind off the roiling in his stomach by talking with Gilly as she nursed her son. “This ship will take us as far as Braavos,” he said. “We’ll find another ship to carry us to Oldtown.”
–George R.R. Martin, A Feast for Crows

Little is certain in the world of A Song of Ice and Fire. Lives are ended with a stroke of steel and mighty strongholds are brought crumbling down into ruin by sieging armies. In such a dangerous and changeable landscape, it seems impossible that something as fragile as a dream could long survive. And yet, a dream—of power, or wealth, or love—may be all that keeps the players of the game of thrones moving forward. Now, you can pursue some of your own dreams with the newest Chapter Pack for A Game of Thrones: The Card Game.

Journey to Oldtown, like The Archmaester’s Key before it, focuses on amplifying the major themes of the game’s fourth cycle. While it continues to follow A Feast for Crows, this cycle brings new strength to the bestow keyword and provides incentives for the factions to forge alliances and band together. Along the way, you’ll encounter a host of iconic characters and locations entering the game, including The House of Black and White, Thoros of Myr, a new version of Arianne Martell, and a lord of House Botley, Tris Botley. 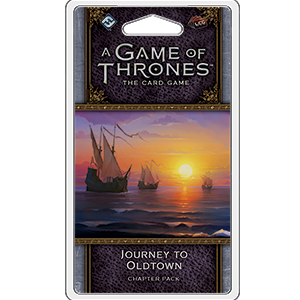 You're viewing: A Game of Thrones: The Card Game 2nd Edition: Journey to Oldtown $11.99
Add to cart