To get the latest updates on availability, please visit our Facebook page

Anachrony is a competitive, epic Euro-style strategy game with worker placement at its core, set in a grim future where Earth has been rebuilt along four different ideological Paths. The game is played through a series of Eras, with a time travelling twist – players can use Time Rifts to reach back to earlier Eras as the game progresses.

Players assume the roles of iconic leaders of the four ideological Paths, striving for the supremacy and prosperity of their people, and do everything they can to prepare for a game-changing event: after the fourth Era, an asteroid impact shakes Earth, threatening to destroy the World Capital, New Earth’s last independent city. When the time comes, the Paths can take their part in evacuating the collapsing Capital. In the end, one of the Paths will be the new home to the reformed World Council, and lead humanity to a brighter future. 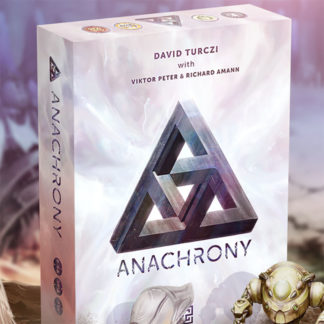