Everyone knows that the Big Four want control over Mars to boost their profits. But what can Mars offer that’s profitable enough to justify the enormous expenses of terraforming a barren, irradiated desert? What’s valuable enough to warrant shipping supplies across the solar system and fighting with the entrenched Clans?

On Mars, as the newest Agendas for each faction demonstrate that HB, Jinteki, NBN, and Weyland can take their goals much farther than they can on Earth. Away from the regulations of national governments and the incessant monitoring of citizen journalists, these corporations are able to pursue their most extreme ideas with impunity.

And now, as the Big Four are growing confident enough about their power over the Red Planet to pursue their wildest agendas, it's time for the Clans to choose their path. Will they band together to oppose the MCA or will they let old feuds tear them apart? The corporations say that they can bring water to Mars, but whose blood will pay for it?

The sixty new cards (three copies each of twenty different cards) of Blood and Water reveal the corporations’ plans for Mars and give the Clans, along with their netrunning allies, a chance to stop them 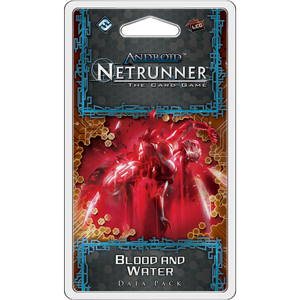