Hardwired is the fourth draft set for Android: Netrunner, selectively downloaded from the whole network of Android: Netrunner products, including more than two dozen cards from the upcoming Mumbad Cycle that players will be able to add to their rigs and HQ even before they become available in Data Packs. You’ll find an emphasis on the mid-game, and you'll also find considerable changes to the Hardwired Draft Starter, including the addition of seven new identities, one for each core Corp and Runner faction.

At the root of the Hardwired draft play experience are randomized Hardwired Draft Packs for both Corp and Runner. The Runner Draft Pack is a selection of 40 randomized cards, drawn from a pool of 240 pre-selected Android: Netrunner cards, including a number of preview cards that highlight the Data Packs in the Mumbad Cycle. Compiled according to a custom algorithm, each unique 40-card Runner Draft Pack is printed and made available to you via Fantasy Flight Games in-house manufacturing.

Bring the excitement of draft play to Android: Netrunner! Each player in a Hardwired draft will require three separate packs:

The cards in the Hardwired Draft Starter that are marked “draft only” are only legal within the draft play format. All other Hardwired draft cards can be found in standard Android: Netrunner LCG® products and are tournament legal while sleeved in opaque or art sleeves. 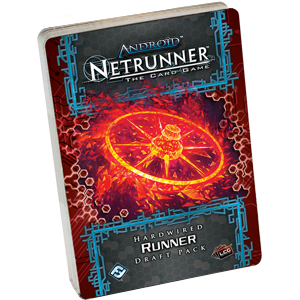