As time has passed, we have lost record of the rise and fall of the Atlantis, but now, you can replay this ancient legend in Imperial Settlers!

The denizens of Atlantis bring their technology to the world of Imperial Settlers with all new mechanics that change the way you must play the game both as the Atlanteans and against them.

The Atlanteans bring a new resource to the world of Imperial Settlers with technology that can unlock special abilities on faction cards and transform common buildings into powerful allies. The Atlanteans must use their abilities to find unique ways to score because their faction buildings sink at the end of the game and do not score points! While the other factions do not have the knowledge to use the technology of the Atlanteans, some buildings for each faction allow them to use some of that technology to their advantage. 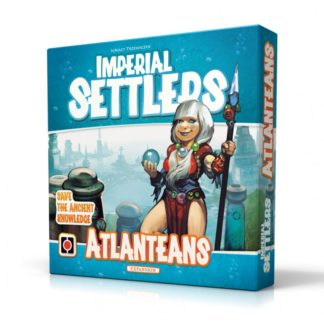