Imperial Settlers: 3 is a Magic Number

What is a good engine building game without set collection? That's right, Imperial Settlers! But why not add in yet another layer of strategy by introducing set collection? In 3 Is A Magic Number, you'll find yourself doing just that! Collect a set of brown buildings to earn more wood. Maybe try to gather sets of black buildings so you can raze more? How about just getting sets of different buildings to score victory points?

All these options will soon be available! Imperial Settlers: 3 Is A Magic Number is the second Empire Pack for Imperial Settlers. This expansion introduces a new rule: SET. This new ability allows players to score and trigger new effects each time they build 3 cards in a particular color, so called SET. With that rule drafting phase and choice of a right card to draft is even more interesting! 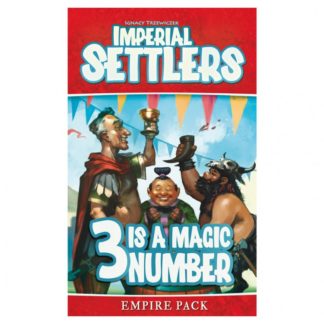 You're viewing: Imperial Settlers: 3 is a Magic Number $10.99
Read more