Lord of the Rings LCG: A Storm on Cobas Haven

A Storm on Cobas Haven is the fifth Adventure Pack and the penultimate chapter in the Dream-chaser cycle for The Lord of the Rings: The Card Game.

After crossing the seas, fighting off Corsairs and sea monsters, and then navigating the treacherous jungle paths of an island infested by undead, several of Middle-earth's heroes return to Dol Amroth – only to find the city threatened by a Corsair fleet. Now, in the scenario from A Storm on Cobas Haven, these heroes must lend their strength to the defense of Dol Amroth and its fleet. It's a nautical battle like no other as your heroes have to demonstrate their newfound mastery of the Sailing test as well as their prowess in ship-to-ship combat.

Fortunately, as you fight your way through dozens of Corsairs and their Ships, you'll gain the aid of Dol Amroth, as well as that of a talented new Tactics hero. Additionally, you'll find thirty new player cards (three copies each of ten different cards), many of which reinforce the Dream-chaser cycle's focus on powerful allies and secondary effects that can be paid for by the group as a whole.

The black sails of the Corsair fleet are massing on the horizon, and the bells are ringing in alarm. The salty sea breeze ripples through your hair. A battle is coming!

This is not a stand-alone deck. A copy of The Lord of the Rings Core Set is required to play. 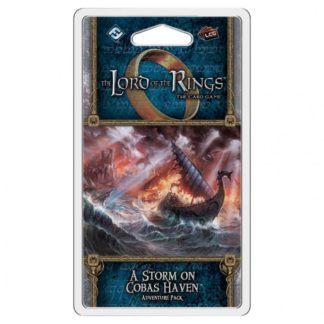 You're viewing: Lord of the Rings LCG: A Storm on Cobas Haven $11.99
Read more