“In the day that Sauron first put on the One, Celebrimbor, maker of the Three, was aware of him […] and so his evil purposes were revealed.”
–J.R.R. Tolkien, The Fellowship of the Ring

Fantasy Flight Games is proud to announce the upcoming release of Celebrimbor’s Secret , the fifth Adventure Pack in The Ring-maker cycle for The Lord of the Rings: The Card Game !

Of the Rings of Power, only the Three crafted by Celebrimbor were never touched nor sullied by the Dark Lord of Mordor. Having suspected Sauron’s evil purposes, Celembrimbor gave them to three Elf-lords who hid them through the ages and used them to resist the Dark Lord’s influence.

Should he recover the One, Sauron will command all the Rings of Power, even the Three, and he will be able to undo all the good that the Elves had created with the Three. Fortunately, though, Sauron does not have the One, and he does not yet have the means to undo the works created from the Three.

In Celebrimbor’s Secret , you will, at last, lead several of Middle-earth’s heroes toward the end of the quest that was given to them by Saruman the White. Amid the ruins of Ost-in-Edhil lies the forge where Celebrimbor crafted the Three. For ages, its location and all within it were kept secret, but as the power of Mordor grows, Saruman desperately seeks any means to fight against the Shadow, including whatever secrets the heroes may discover in Celebrimbor’s forge. 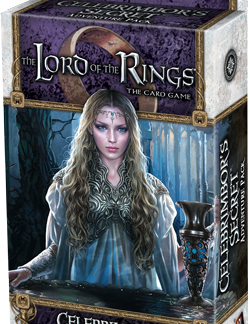 You're viewing: Lord of the Rings LCG: Celebrimor’s Secret $11.99
Add to cart