Lord of the Rings LCG: Murder at the Prancing Pony

Originally released during the 2015 The Lord of the Rings: The Card Game Fellowship Event, Murder at the Prancing Pony is a thrilling standalone scenario in which several of Middle-earth's greatest heroes are called upon to solve a mysterious murder. Barliman Butterbur, the proprietor of The Prancing Pony, has discovered a dead body lying slumped and bloody in the corner of his establishment, and it falls to your heroes to bring the murderer to justice!

Murder at the Prancing Pony introduces scenario-specific rules for an “Investigation deck” and challenges players to look for clues to narrow down their lists of possible suspects and hiding places. The result is a classically engaging murder mystery, given life in Middle-earth in card game form, and the many different possible combinations of suspects and hiding places keep it fresh from play to play. Meanwhile, you don't win Murder at the Prancing Pony as soon as you identify the killer and his or her hideout. The scenario's five Suspect enemies are all talented killers, each of whom has mastered a different fighting style, and you'll find Murder at the Prancing Pony every bit as challenging as it is entertaining. 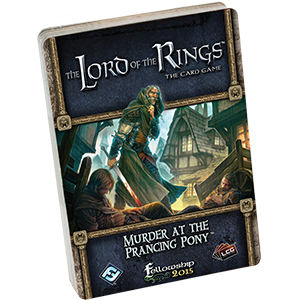 You're viewing: Lord of the Rings LCG: Murder at the Prancing Pony $11.99
Read more