Lord of the Rings LCG: Escape from Mount Gram

“It was deep, deep, dark, such as only goblins that have taken to living in the heart of the mountains can see through. The passages there were crossed and tangled in all directions, but the goblins knew their way.”
-J.R.R. Tolkien, The Hobbit

Escape from Mount Gram is the second Adventure Pack in the Angmar Awakened cycle for The Lord of the Rings: The Card Game.

For centuries, the Goblins of Mount Gram have remained hidden within their dark stronghold. Their past attempts at invading Eriador are but distant memories. Still, they live in lands tainted by ancient evils, and evil lives within their hearts. Now, in Escape from Mount Gram, the Goblins of Mount Gram are once again up to trouble, and when they capture a host of Rangers and heroes, it's up to you and your heroes to lead a daring and dramatic prison break!

In addition to its wild, new scenario, Escape from Mount Gram introduces a new hero for the Lore sphere and three copies each of nine different player cards. These cards explore a variety of different themes, divided among the different spheres of influence. While Leadership players benefit from a pair of cards that encourage direct action against the Enemy, Tactics players gain a pair of Ent-focused cards, Spirit players gain a new side quest, and Lore players gain two cards that support a new mechanic based around manipulating the encounter deck and the victory display. 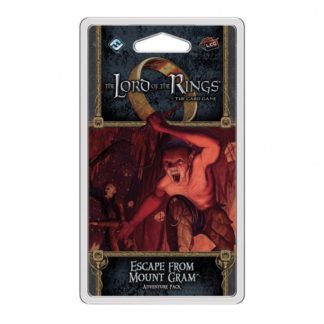 You're viewing: Lord of the Rings LCG: Escape from Mount Gram $11.99
Add to cart