Lord of the Rings LCG: Heirs of Numenor

“Believe not that in the land of Gondor the blood of Númenor is spent, nor all its pride and dignity forgotten. By our valour the wild folk of the East are still restrained, and the terror of Morgul kept at bay; and thus alone are peace and freedom maintained in the lands behind us, bulwark of the West.” –Boromir, The Fellowship of the Ring

Evil stirs in the lands of Mordor. Smoke rises from the mouth of Mount Doom, the Dark Lord’s power grows, and his armies push outward. Against this shadow growing in the East, the Men of Gondor form the first solid line of defense. Can they stand fast against the onslaught from the East?

Heirs of Númenor is a deluxe expansion for The Lord of the Rings: The Card Game that transports your games to the realm of Gondor with 165 new cards (including three copies of each player card). Two new heroes and a host of new allies arrive to join an escalating war against the forces of evil, and three new scenarios lead you from the relative safety of the streets of Pelargir to the heat of an epic battle with an army of Orcs and Southrons. 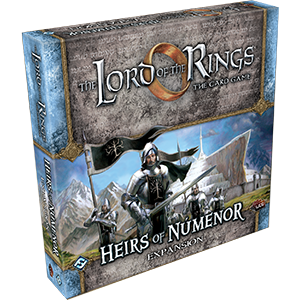 You're viewing: Lord of the Rings LCG: Heirs of Numenor $23.99
Add to cart