Lord of the Rings LCG: The Land of Shadow

“It’s my doom, I think, to go to that Shadow yonder, so that a way will be found. But will good or evil show it to me? What hope we had was in speed. Delay plays into the Enemy’s hands-and here I am: delayed. Is it the will of the Dark Tower that steers us?” –Frodo, The Two Towers

The fourth The Lord of the Rings Saga Expansion for The Lord of the Rings: The Card Game, The Land of Shadow allows you to continue upon your epic journey from the Shire to Mount Doom with three new scenarios that recreate the adventures recorded in the second half of The Two Towers.

Join Frodo Baggins as he draws near to the land of Mordor on his quest for Mount Doom. Wrestle with Gollum at the edge of the Dead Marshes, join the Rangers of Gondor as they ambush the Haradrim in Ithilien, and brave the deadly dark of Shelob’s lair. While these scenarios each provide exciting and memorable challenges when played on their own, they can be combined with your other The Lord of the Rings Saga scenarios in Campaign Mode, where the consequences of your decisions continue to haunt you throughout your ongoing adventures. In addition to its new quest and encounter cards, The Land of Shadow also gives weight to your adventures with new boons and burdens. Finally, three new heroes and player cards for each sphere of influence permit new strategies and further increase your deck-building options. 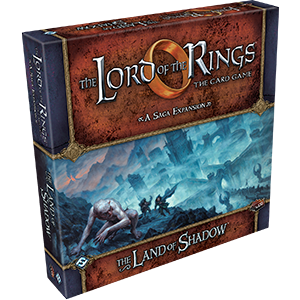