Lord of the Rings The Card Game: The Sands of Harad

The sixth deluxe expansion for The Lord of the Rings: The Card Game, The Sands of Harad gives you and your heroes a chance to explore the strange lands and cultures in the southern reaches of Middle-earth.

Three new scenarios carry you from the coast, deep into the desert of Harad, and then back within the reach of Mordor and the Dark Lord's Orcs, although in such a fashion as you have never seen before. Along the way, you're bound to encounter countless ferocious Haradrim, gruelling environmental effects, and deadly desert predators. You will also have to overcome the ancient animosities that have long festered between the Men of Gondor and those of Harad.

Meanwhile, your desperate journeys may also lead to desperate alliances, and you'll find a pair of heroes who make each other stronger, as well as a cluster of new player cards that require paired Traits to trigger, but that then offer tremendous rewards. You'll also find new allies for each sphere of influence and a game-changing side quest that allows you to ignore resource matching on the first ally you play each turn.

This is not a standalone set. A copy of The Lord of the Rings: The Card Game Core Set is required to play. 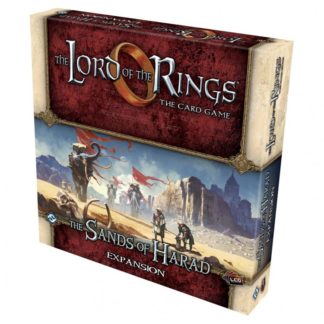 You're viewing: Lord of the Rings The Card Game: The Sands of Harad $23.99
Add to cart