Are you technically a grownup but don’t feel like it?

Pretending to Grownup is a casual card game with over 100 unique cards featuring common grownup situations. You’ll be facing these problems and using your time, money and energy scores to win “Grownup Points”. But some cards feature a silly creature called a “Unipegasaurus”, which lets you bend the rules with the power of your imagination!

You can face these problems or use the power of your imagination to bend the rules. Throughout the game you'll see which player is the most grownup by using the only three resources at a Grownup's disposal: time, money and energy.

However you can get a Unipegasaurus card which helps you bend the rules of being a grownup by using your imagination. (Uni-pega-saur-us). Included in the game is an adorable, wooden unipegasaurus meeple, referred to in the game as “The Daydream Token”.

With artwork by Megan McKay of the webcomic Doodle for Food and game design by Jason Anarchy, whoever said being a grownup was difficult never pretended this hard. So it’s okay you aren’t exactly a grownup, your secret’s safe with us! 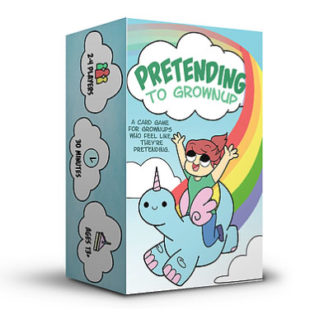 You're viewing: Pretending to Grownup $22.99
Add to cart