Raiders of the North Sea: Fields of Fame

In Raiders of the North Sea: Fields of Fame, enemy jarls have joined forces to help defend against the onslaught of raids on their settlements. But despite their threats, there is fame awaiting those who seek to kill or subdue them. Encountering a jarl is sure to bring injury, but now is no time for the faint-hearted. Onwards to the battlefield!

Fields of Fame brings a new dynamic into the game with the addition of Jarl tokens being mixed in with the Plunder and Valkyrie. When taking a set of Plunder with 1 or more Jarls, the raiding player must reveal from the draw pile, which Jarls they are encountering. They have the option to kill (for Fame and other rewards), subdue (to recruit them) or to flee. Killing and subduing will bring wounds to a players crew, but fleeing will lose them Fame or Victory Points. Players can also gain Fame by raiding with overpowered crews. When a crew's strength is above the highest tier for scoring Victory Points, players move up with the Fame Track, which scores additional Victory Points at the game's end.

*This is not a standalone game. Requires Raiders of the North Sea to play. 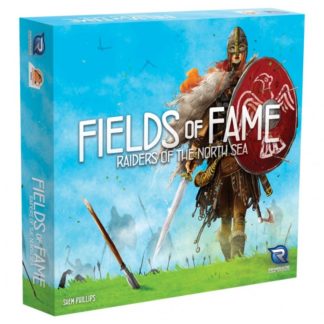 You're viewing: Raiders of the North Sea: Fields of Fame $25.99
Read more