Raiders of the North Sea: Hall of Heroes

In Raiders of the North Sea: Hall of Heroes, a mead hall has been constructed, attracting a new breed of adventurers. Each raid brings new quests for the daring to endure. But with mead in abundance, there is little room for the wary. So sharpen your axe and ready your shield, there are new adventures awaiting!

Hall of Heroes brings in new ways of gaining resources, acquiring crew and scoring Victory Points. After each raid, a new Quest is placed onto the Board. To complete a Quest, players will need to send (discard) warriors from their hand of a certain strength value. Once completed, the Quest is placed above a Player's Board and will score Victory Points at the game's end. Each Quest also rewards players with Iron, Gold, Silver and other resources. Players can also collect Mead, which can be spent during a raid to fuel their crew and gain even more strength in battle!

*This is not a standalone game. Requires Raiders of the North Sea to play. 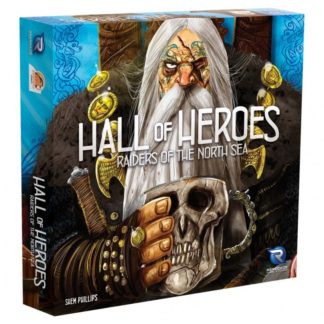 You're viewing: Raiders of the North Sea: Hall of Heroes $25.99
Read more