This comes with the Rayguns and Rocketships, Warwulf Mercenary, Planeteer Plastic Pack (including 30 Blast tokens, 30 Action tokens, and a Limited Edition canvas bag)

Designed by renowned video game designer and author Scott Rogers, Rayguns & Rocketships is a miniatures board game for 2-4 players. Featuring an inventive dual-scale system, players in Rayguns & Rocketships take command of their bulky-but-powerful Rocketship, as well as their agile crew of Planeteers! Players will need to think strategically and plan ahead as their Rocketship’s movements must be pre-programmed. Luckily, any poor decisions on the Rocketship scale can be quickly adjusted on the crew scale. Provided you have enough action points saved up, you can send your crew to repair the ship, man the Rayguns, or push the engines into overdrive!

You’ll need everything you can muster if you wish to successfully command your crew as you race your opponents to accumulate enough victory points to claim the galaxy for yourself! 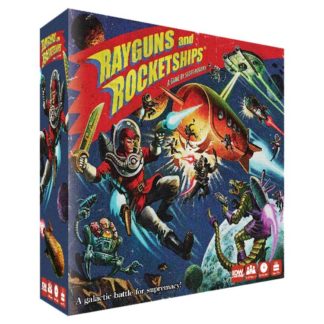 You're viewing: Rayguns and Rocketships Kickstarter Bundle $79.99
Add to cart