“Here ye, here ye! By order of the honorable Prince John, beginning this day, all merchants must halt upon arrival to Nottingham and declare forth their goods entering the city!”

Prince John's lust for gold has finally gone too far! It's impossible for a merchant to make a living anymore, being taxed as much as we are. Now he's got the greedy Sheriff of Nottingham checking everyone who comes through the front gate for “contraband” – meaning all the good stuff he's trying to keep for himself! Good thing you know the Sheriff better than Prince John does. That shifty, no-good, greedy fellow might be intimidating when he stands in front of the city gate, but let's be honest, he is not above taking a well-placed bribe to look the other way. You have come to Nottingham with your Goods on market day, and the only thing standing between you and your hard-earned profits is the Sheriff. All you need to do is bluff or bribe your way past him… or maybe, tell the truth!

The Sheriff of Nottingham is a fun and engaging game for all where each player will have the chance to be the Sheriff himself! As peasants, players will declare goods they wish to bring into the city and it will be up to the Sheriff to decide who is telling the truth and who is secretly trying to smuggle in contraband!

Experience Nottingham in a whole new way! Declare your goods, deal with the Sheriff and secure victory in a fun-filled and exciting adventure!

We first saw this game played on Tabletop. This game is a lot of fun for 3-5 players. It's fun bluffing and bribing opponents during the game.
– Elliott 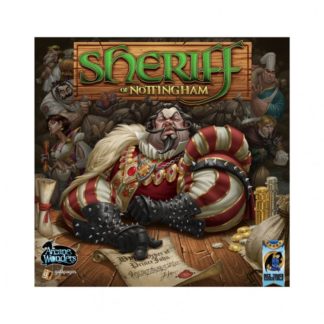