The Golden Ages is a civilization building game, which differs greatly from others, as it uses streamlined euro mechanics for the players to create the greatest civilizations. Players lead their civilizations through history. The game lasts four different eras, during which you develop technologies, create fine arts, erect buildings, and build wonders. You'll send explorers to discover the continents, found cities in distant lands, and send your soldiers into battles.

In each era, the players will: show/discard the civilization that they will play during the era; discover new continents placing tiles on the map; take turns doing actions (explore/found a city, erect a building, make arts, build a wonder, develop a technology, activate a building/wonder, attack another player, start a Golden Age).

The first player starting a Golden Age during an era chooses a “History Judgment” card that states the way all the players will score in that round. Each player who started a Golden Age continues taking money at his turns until all other players have passed.

There are many ways to score points (artists, history judgment, wonders, technologies, attacks, money, secret future technologies, etc.), and then also many different ways to achieve a victory. Will you succeed in evolving your civilization through history, overwhelming your opponents on the way to glory? 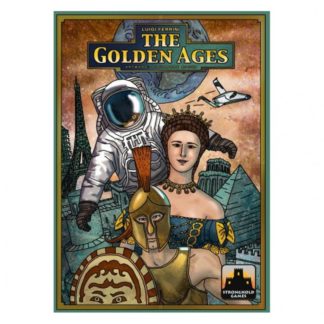