The city of Magoria has not always been a place of magic and mystery. Decades ago, it was just another ordinary trade center loaded with shameless courtesans and greedy merchants longing for more and more wealth and prosperity.

But, as we have already learned from history, a single man's will, if strong enough can change the world. It wasn't different with Magoria either; it only took one person, with immense talent and ambition, to change things forever.

A talented young boy inspired by the enigmatic world of illusion tried his luck on the street with his revolutionary acts of magic. It didn't take long for people to take notice, and within weeks, he was already considered to be a genius by the public. The acts of even the greatest illusionists of the time seemed shallow and mediocre compared to his talent. In less than a year, the youngster became one of the greatest magicians of his time, a true legend of illusion who became known as Dahlgaard the Magnificent.

Trickerion: Legends of Illusion is a competitive Euro-style strategy game set in a fictional city inspired by the late 19th century urban life and culture, where players take on the role of rival stage illusionists.

Players strive to become the city's greatest Magician by acquiring the most Fame points. But there is much more at stake than prestige alone. The audience's favorite wins the contest for the mighty Trickerion Stone, a relic that grants supernatural powers to its owner, making him a true Legend of Illusion. 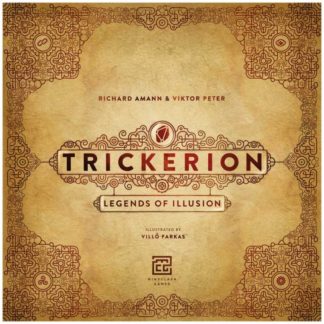