All around the world, from Moscow to Washington, from Paris to Rome, Supervillains have run amok. Iconic monuments are being stolen right out of the cities, and high-profile scientists and politicians are going missing. Even the famed detective, Sherlock Holmes, is gone without a trace. The world`s treasures are vulnerable to the most nefarious villains out there. In Victorian Masterminds, players take on the role of Supervillains attempting to hatch an evil scheme. They send their Agents out to the great cities of the world to advance their plots, or mess with the plans of their opponents. Careful planning can result in the spoils of Supervillainy, like collected resources, captured Buildings, or recruited Scientists. These Villains are racing to complete their Infernal Machines, but the Secret Service will be hot on their trail as well. 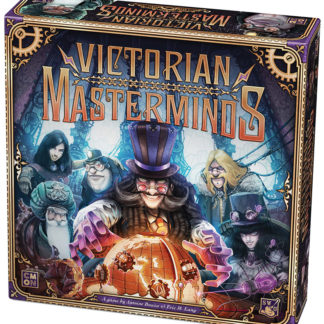