Orcs and Humans have never had an easy relationship. The borderlands between the two groups were regularly sites of conflict, as both sides would raid into the other’s territory. But something new has swept across the border. No simple pillaging party, an entire host of Orcish Zombies have spilled forth. The Survivors of the zombie plague are going to have a whole new set of problems they’ll have to deal with if they want to continue breathing.

Zombicide: Green Horde is a stand-alone sequel in the Zombicide: Black Plague series. In it, players work cooperatively, taking on the role of Survivors of the zombie outbreak. In each scenario of the campaign, they have different goals to accomplish and must utilize new strategies in defeating this powerful, new, green threat. Orc zombies hit harder than the human variety, and there’s always the looming danger of a whole horde of Orc zombies being released onto the board at once. It is a challenge the likes of which humankind has never faced. Who will survive, and what will be left of them? 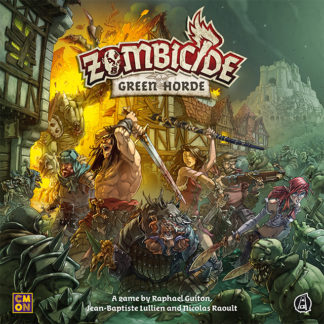