The history of the doomed expedition is shrouded in whispered parlor rumor. A group of adventurers set out by riverboat, deep into a remote jungle, in foolish pursuit of fortune and glory. The battered journal of the lone survivor, said to contain fantastical scribblings of ancient secrets and terrible things awakened, was soon consigned to the sanatorium furnace.

In Ancient Terrible Things, you play the role of an intrepid adventurer, exploring a dark jungle river. Each turn you must travel to a Fateful Location, face an Ominous Encounter and attempt to unlock its Ancient Secrets. If you succeed (using a combination of dice, tokens and cards), you add the Secrets to your score. If you fail, you unleash a Terrible Thing, which counts against your score at the end of the game. The object of the game is to be the player with the most Ancient Secrets when the game ends at the Unspeakable Event. 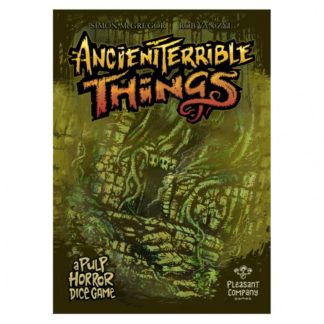