“Clean yourself up, and play the game. Play the part like you always have, and maybe you’ll survive. Frag this up, and you’ll wish you’d never been born.”
–Ibrahim Salem

Election Day is here in Fear the Masses, the sixth and final Data Pack in the Mumbad Cycle for Android: Netrunner! After the Indian Union’s election cycle has hinged upon heated debates over clone rights, the election’s final events will carry forward for many generations…

Featuring some of the most potent and deck-defining cards from the whole Mumbad Cycle, Fear the Masses carries the cycle to its climactic conclusion, but leaves it to you to deal with the fall-out. Sixty new cards (including a complete playset of nineteen different cards), feature plenty to excite fans of both NBN and those Runners who identify themselves as Anarchs. NBN gains a new identity, a new region upgrade, and two potentially game-changing assets. Meanwhile, as they march against Corp HQs, the Anarchs rally the masses toward dissent and high-pressure discard strategies.

Of course, there’s plenty for every faction, and Fear the Masses offers neutral cards for the Runner that give you good odds of bypassing Corp ice for free, as well as a neutral agenda for the Corp that’s worth two agenda points, but only requires three advancement to score. 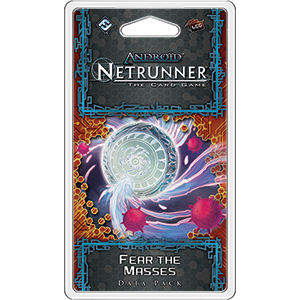